ANNOUNCING: A NEW COLLECTION OF ESSAYS BY PAUL LAFARGUE

“A strange delusion possesses the working class … this delusion is the love of work, the furious passion for work, pushed even to the exhaustion of the vital force of the individual and his progeny” — Paul Lafargue 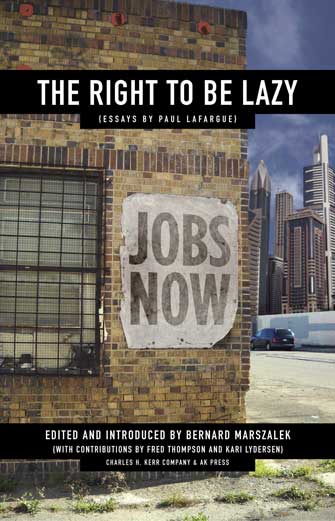 Paul Lafargue, the multi-racial French son-in-law of Karl Marx, is best known as the author of the Right to be Lazy, the most popular radical text after The Communist Manifesto. This new collection of this essays spotlights his compelling satiric wit.

Lafargue unmercifully attacked the work ethic, before it was defined by Max Weber, advocated maternity leave in the French Chamber of Deputies in the 1890s, promoted voting for a popular race horse to ridicule an electoral circus, exposed the farce of papal infallibility and generally advanced the widest range of cultural critiques in the 19th  Century, and yet he remains largely unknown.

Correcting the historical record however is not the ultimate aim of this volume. Lafargue’s criticisms and caustic attitude serve as an antitoxin for the major malady of our age — mass manipulation.

“I’m delighted that this scholarly, informative and revealing edition of Lafargue’s great anti-work polemic has come out. The ideas are even more relevant to today’s enslaved societies than they were when they were first written.”

Tom Hodgkinson, Editor of The Idler

“We cannot be the creators of our own world until we confront the destructive nature of modern work – and supplant it.”

“In an era stuck between exhaustion and despair, too much stupid work on one hand, only exceeded by the vast waste of the unemployed, its high time we revisit the deep radicalism of our nineteenth century forebearers. Twenty first century Nowtopians are inventing new ways to work and not to work – following the inspired essay by Paul Lafargue.”

The Right to be Lazy: Essays by Paul Lafargue (C.H. Kerr Co & AK Press) can be ordered directly from AK Press.

Bernard Marszalek and Chris Carlsson (Nowtopia) discuss The Right to be Lazy with the audience at a Shaping SF event in 2011.

Ztangi Press got its name from a tag discovered in Chicago. Learn more about the origins of Ztangi Press...

An archive of essays sorted chronologically and by subject. See Essays...

For a Ludic Society